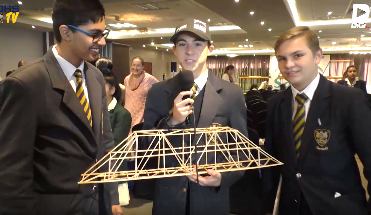 The competition is for Grades 10 to 12 learners from Durban schools and serves to bridge the gap between the civil engineering profession and the youth of South Africa.

Three of our boys went along to the competition, Troy Getkate and Mohamed Ismal (Grade 8) who competed and Storm von Mollenberg (Grade 9) who made this record of the event.

“Coastlands Hotel recently hosted the 29th Annual Bridge Building Competition. When we arrived we attended a talk by MKK Group and had other interesting conversations about engineering.

Most of the competitors were also first timers and so the bridge designs varied from heavy but straight bridges to light current bridges.

In order to have a regulated bridge you first have to pass the “car test” in which they poke a wooden platform through the bridge and if smooth you pass.

Then onto the weight test, bridges many not exceed 300 grams. The DHS bridge was the lightest bridge in the competition, weighing in at 124 grams. Having the lightest bridge did make it an uphill battled for us, making us question our bridge’s structural integrity.

Although this was a competition there was a strong sense of community with like-minded people who enjoy some fun and seeing our creations being put to the test … It was almost as scary watching others face their fears when their bridges were tested as it was when ours was tested.

At the end of the day, we all laughed and thoroughly enjoyed ourselves.

After all the bridges were tested we listened to a farewell talk that taught us how civil engineers have a hand in everything in our day to day lives, from bridges, hospitals, schools, even our homes were designed by a civil engineer. We proceeded to the awards ceremony.