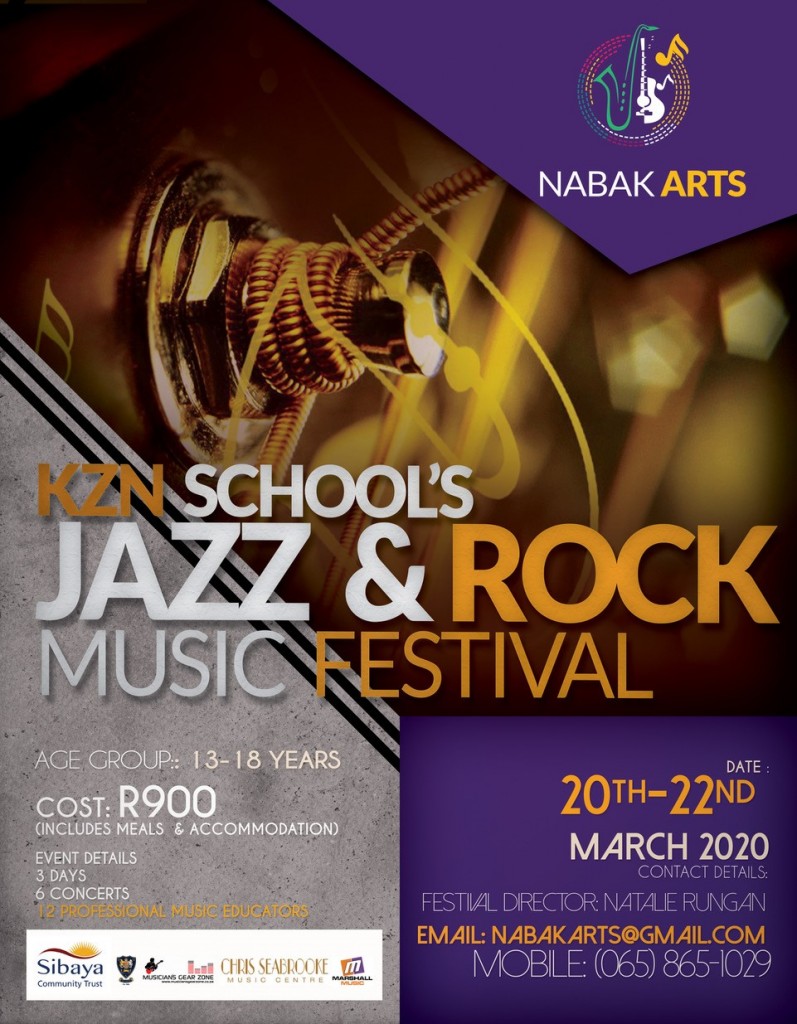 Durban High School is proud to be hosting the inaugural KZN Schools Jazz & Rock Music Festival from 20 to 22 March 2020. Our Head of Music, Ms Natalie Rungan is the Festival Director.

An article on the Festival appeared in the Sunday Tribune, a copy of which is below:

A soulful, uplifting and educational holiday break has been lined up for KZN youth with an affinity for music, who will get into the mix with some of the best local musos.

Non profit company Nabak Arts, an organisation focused on developing music education in the country, have planned a weekend-long KZN School’s Jazz and Rock Music Festival, which begins on March 20.

Entry to the holiday camp that will play out at Durban High School (DHS) and ends with a grand finale music concert on March 22, has been limited to 80.

Well known Durban singer and songwriter Natalie Rungan, the festival’s director and founder of Nabak Arts, said the holiday camp would expose youngsters to a loaded programme of teachings on jazz and rock music and rehearsals for the finale.

Rungan together with other accomplished music educators and professionals will conduct the workshops and rehearsals at the festival.

She said it was her mission to provide the next generation of musicians with a platform to display their talent, and KZN was an ideal starting point. After all, the province was home to Ladysmith Black Mambazo, Black Coffee, Big Nuz and other great musicians.

“Part of me joining the DHS music program was to build the next generation of musicians.

“Knowing where the music industry is right now, classical music is a very good foundation. Many students, however, fail to take it further. Our hope is that this camp will help build a bridge.”

Rungan said music genres like jazz, rock and pop had a good impact on the youngsters.

“I found that by teaching jazz especially at school (DHS), it has opened the minds of young people. They have discovered a different style of music, and have embraced it to such an extent that we now have a big band at school.”

She said the idea of a festival had long been on her mind. Participants at the festival will be split into four bands, with each having a leader. One of those bands will be led by famed local singer, Ernie Smith.

“When Ernie Smith heard about the idea, he jumped on board. He will be one of our headliners for the main concert (Sunday, March 22).

“The entire programme will happen at DHS, including the main concert.”

Rungan revealed that all the youngsters would be housed at the school’s dormitories for the event because it enabled them to take in camp offerings in a safe environment.

Other performers at the festival will include the KZN Youth Orchestra, Rungan and her band and others.

We are very excited about this exciting initiative and look forward to enjoying some wonderful performances.

Tickets are available from : Quicket:
https://www.quicket.co.za/events/99155-kzn-schools-jazz-and-rock-music-festival-2020/