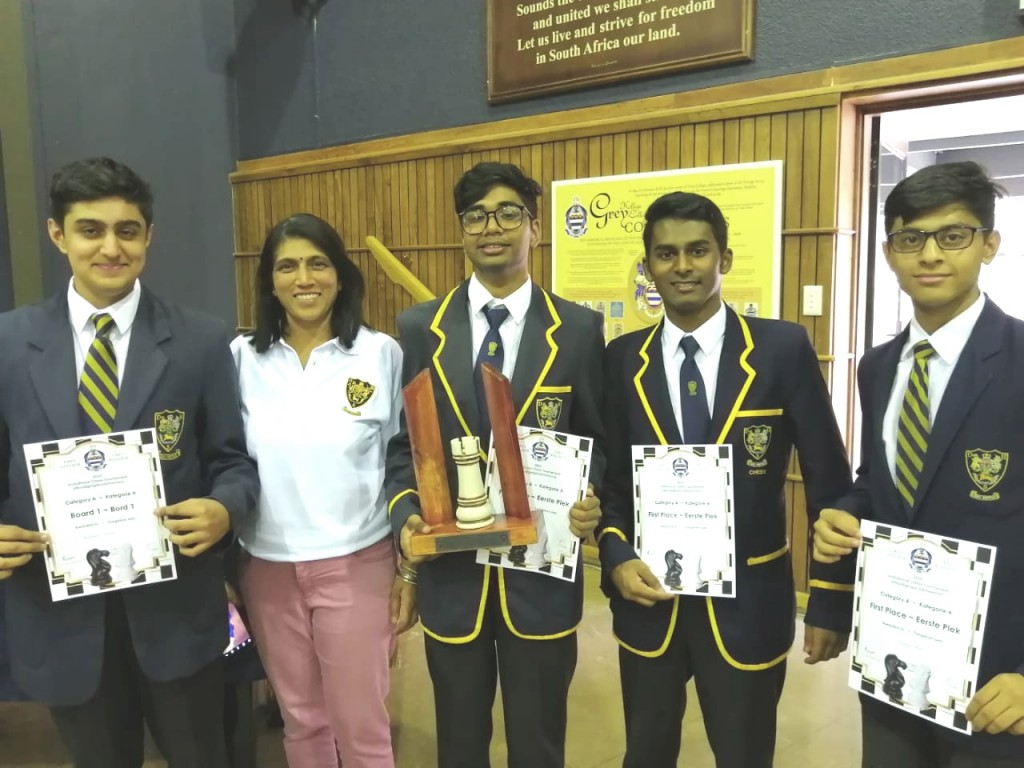 Our motto: “We win with grace, and lose with greater grace.”

The prestigious Grey College Inter Provincial Chess Tournament took place earlier this term. This 60/60, 5 round Swiss tournament attracts learners from High schools across the country, with 25 schools participating this year. Each team comprised 4 learners playing in either the A or the B Section. Durban High School had four teams participating.

Day 1: Thursday 31 January
We departed for Bloemfontein at 08h30 from Top Field. By now the sun was shining and we knew it was going to be a hot ride. The next 10 hours was going to be quite interesting, especially for Diego who had never been to Bloemfontein before. He was convinced we were going to the Cape!

We made good time and our stop at Montrose started with a photo shoot. Needless to say, other travellers who had also made a pit stop were quite impressed with our boys’ attire and stood to admire them. An elderly lady was highly impressed with our boys’ impeccable manners, especially as we were not the only school stopping over. She made a point of telling me that they had just ignored her.

We finally reached our destination “Hide Park Lodge” at about 18h00. The “Vrystaat” scorching heat was unbearable. The ladies at Hide Park are just amazing. They had everything ready and waiting for our boys. After checking in and a much needed shower and change we went in search of some food. The stadium Food Court, especially McDonalds and Debonairs, was going to see much of us for the next two days.

Day 2: Friday 1 February
Another scorcher of a day. The tannies in the kitchen bend over backwards to make sure that our tummies are full. They are always so impressed with the way in which our boys conducted themselves. Mr Cele enjoyed the pampering he gets from the ouma.

At 12h30 we made our way to Grey College for Day 1 of the tournament. Armed with pens, notation books and clocks the battle began – 61 teams in total did battle for the coveted trophy. 24 teams participated in the A section and 37 in the B section. Again, the standard of Chess was quite high and daunting, especially for our babies – the Grade 8 boys and some of the older ones who had never participated in such a tournament before.

It was a good start to the day, with our A team scoring a total of 3 points in Round 1. After a lovely dinner of Romans pizzas and cold drink, the next round was played at 19h00 and ended at 21h00. Round 2 was much better, with the A & C teams winning all their matches. The happy chappies went off to the food court for a late night snack (burgers and pizzas – again) and then it was off to bed.

Day 3: Saturday 2 February
Round 3 commenced at 08h00, and thankfully the weather was cooling down a bit – 36 degrees today. At the end of Round 4, we knew we could win the tournament as we needed 3 points to be a clear winner. I have no idea why we were so nervous. After much nail biting, we forged ahead and banked 17 out of 20 points!

Our Team did extremely well and were so proud to go up to the podium and receive their gold medals for the second year in a row.

The top scorer and receiving the Board 1 prize for winning all his games, was Naseem Essa. Congratulations to the all the boys for their sterling effort and to a tournament well played.