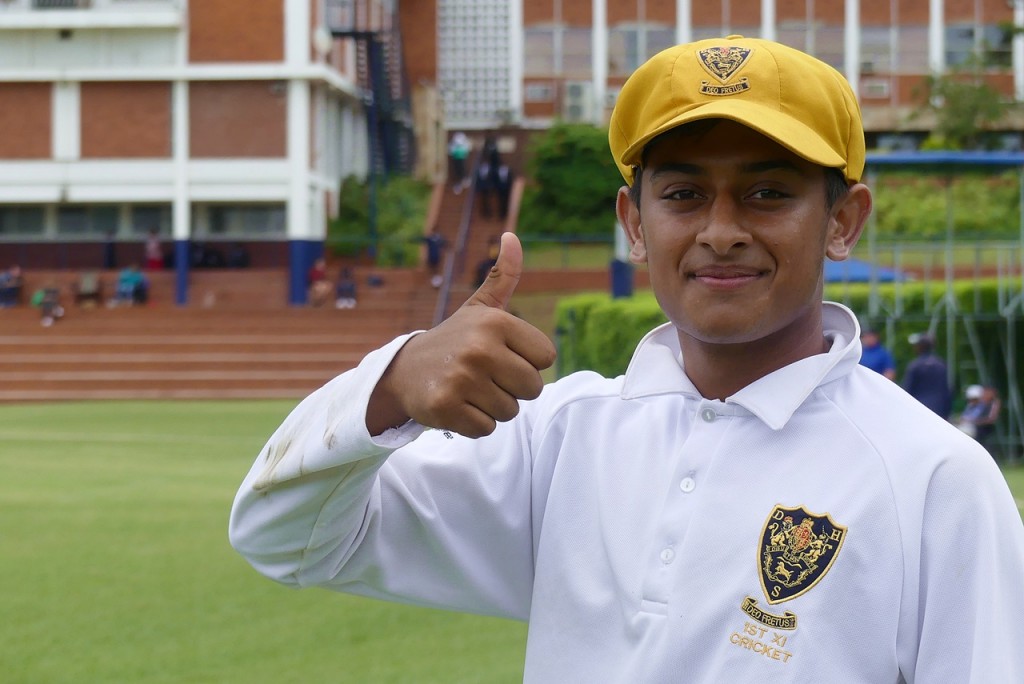 The DHS and Northwood first cricket teams produced a nail-biting clash on Theobald Oval on Saturday. In a match reduced to 45 overs a side after a late start due to heavy overnight rain, Northwood held off a brave DHS effort to win a match played in difficult conditions by a mere seven runs, writes KZN10.com’s Brad Morgan.

“It was a nice tight game, a good game of cricket, especially considering we didn’t think we would be able to play,” DHS Director of Sport, Nathan Pillay, commented afterwards.

If it wasn’t for the cool head of number three batsman Kyle Northend, Northwood would have found themselves well on the wrong side of the result. Thankfully for them, he showed impressive resolve at the crease, working hard on a tricky track to accumulate runs and keep out the DHS bowling attack as all around him his team-mates struggled to deal with the challenge.

He contributed just more than half of the visiting side’s total of 176 for 8, finishing unbeaten on 89 fromm 156 deliveries, with seven fours. It was a stand out effort, especially when measuring it up against the other run producers.

Next best was extras with 28, while Jawaad Aziz weighed in with a valuable 26 as he and Northend put on 85 for the sixth wicket to rescue Northwood from a perilous 59 for 5. Adam Chislett, with 10, was the only other player to make it into double figures.

DHS skipper Josh Stride led their attack well, capturing 3 for 39 from his 10 overs. Sonqoba Makhanya shone with a return of 2 for 20 from his eight overs, while the spinners, Muhammed Moosa and Bonga Shezi, with 1 for 28 in 9 and 1 for 24 in 7, put the under batsmen under pressure by keeping it tight.

Three of the top four in the DHS innings failed to get going, but Moosa, who opened the innings, held things together with a watchful knock. His stay in the middle last until the total had reached 114, but by then he had tallied 53 from 102 deliveries, with four fours. He became the first of a telling three batsmen to be run out.

Corné Nel made some useful runs, hitting 20 in a stand of 41 with Moosa. Unfortunately for DHS, Humphrey van der Merwe joined Moosa back on the side of the field on the same total as the hosts slumped to 114 for 6, leaving the match on a knife edge.

DHS captain Josh Stride did a superb job at number seven of taking the game to the Northwood bowlers, but successive run outs of the number nine and 10 batsmen left DHS down and almost out on 142 for 9, still 35 runs shy of victory.

A win for Northwood seemed inevitable, but Stride and Lloyd Mulligan were not done yet. The skipper hit out, while Mulligan did his bit by adding runs and holding down his end. Unfortunately for DHS, it proved to be a bridge too far. Mulligan was the last man out, LBW to Dylan Ferreira for 10, while Stride finished on 28 not out, made from just 23 balls, with two fours.

Basil van der Spuy was the pick of the Northwood attack, consistently challenging the batsmen with his accurate bowling and lively pace. He sent down nine overs, two of which were maidens, and accounted for three batsmen. Opening bowler Thulani Chiliza did a good job, picking up 1 for 21 in his nine overs, while three others claimed a wicket each.

In the end, though, three runs outs and the undefeated bat of Kyle Northend proved decisive as Northwood came away, somewhat relieved, with a hard-fought victory.

“Our boys showed a lot of fight. We’ve had two tight games in two consecutive weeks. It’s a bit disappointing to lose the tight ones, but it’s a good learning curve for the boys. Hopefully, next time when they’re in a similar situation, they can pull through,” Sports Director Nathan Pillay said.

“Captain Josh Stride did very well once again,” he added. “He really is turning out to be a good cricketer, and one to watch for the future. He’s always in the runs or taking wickets, and he’s a very good leader.””

Article and photos from:
http://kzn10.com/dhs-come-up-just-short-as-northwood-take-tight-victory/