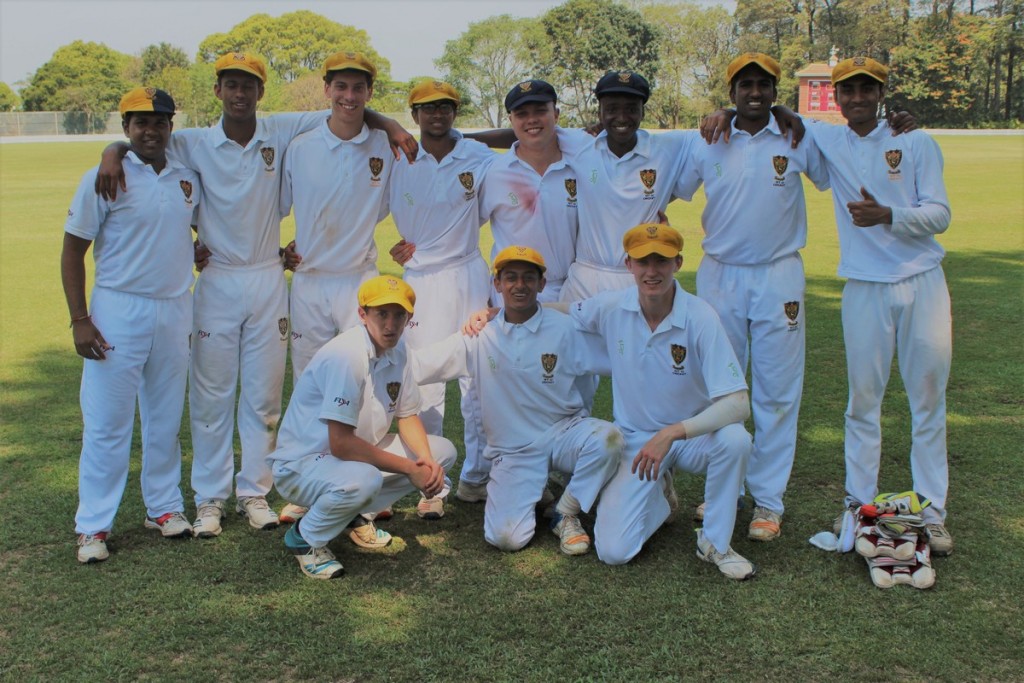 DHS vs Kearsney College
Kearsney won the toss on a sweltering day in Bothas Hill. Kearsney’s openers were aggressive from ball one and this got Kearsney off to a flying start. DHS had to introduce spin earlier than they wanted but when Ross Shedlock (3 for 50 in 10 overs) and Muhammed Moosa (1 for 14 in 10 overs) bowled together they restricted the Kearsney batters and slowed down the run rate.
Unfortunately, when these two had bowled their 10 overs they were not backed up by the bowlers during the back end of the Kearsney innings and we allowed Kearsney to reach 269 for 6 in their 50 overs.
DHS were on target and by tea had reached our planned target with maybe one more wicket down than planned. After tea, the Kearsney spinners bowled some tight overs, putting pressure on the DHS batters to score and in doing so, we lost wickets. DHS were eventually bowled out for 179.
Kearsney – 269 for 6
R Shedlock – 3 for 50 (10)
DHS – 179 all out
B Sambhu – 46
H van der Merwe – 38
DHS lost by 90 runs
DHS vs Westville Boys’
Westville won the toss and decided to bat. Westville lost an early wicket but consolidated for a 40 run second wicket partnership. The introduction of Jordan Bryan (5 for 26) and Ross Shedlock (3 for 25) who both bowled really well in partnership soon had Westville 88 for 7. DHS missed a huge opportunity when the Westville captain was dropped on 48 with the score on 96. He went on to score 73 which saw a strong Westville batting unit reach 133 all out.
DHS then needed to bat for 10 overs before lunch. This is always a tricky time to bat and unfortunately DHS lost 3 wickets for 20 runs.
After lunch, DHS were up against a determined and quality Westville bowling attack. Josh Stride, who was promoted up the order batted really well only to lose his wicket to some brilliant fielding. Humphrey van der Merwe, who batted with an injured hamstring gusted it out and nearly got DHS home with a well-played 36. He was our last man out, unfortunately running himself out 8 runs short.
Another close game which unfortunately DHS just could not get over the line against a very strong Westville team.
Westville:    132 all out
J Bryan – 5 for 26
R Shedlock – 3 for 25
DHS:              124 all out
H van der Merwe – 36
DHS lost by 8 runs
DHS vs Ink Hub – Coca Cola T20
DHS won the toss and elected to bat against a team who unfortunately only had 9 players. Due to the overcast conditions and threatening rain both teams decided to restrict the game to 15 overs each. DHS openers Yudi Ramanand (100*) and Corne Nel (50) got DHS off to a great start by putting on a run a ball 100 partnership for the first wicket. DHS reached 177 for 1 in their 15 overs.
INK were immediately under pressure by losing two early wickets, but their opening batsman batted solidly for a well played 50. However, with only 9 players, they were always going to find it tough. MA Khan bowled really well taking 4 wickets.
DHS:      177 for 1
Y Ramamand – 100*
C Nel –   50
INK         87 for 5
M A Khan – 4 for 6 (2overs)
DHS won by 90 runs
DHS vs Maritzburg College
DHS Captain Taine Owen won the toss and elected to bat. This decision was vindicated when DHS had College 9 for 2; it should have had a further two wickets had it not been for a simple dropped catch and wicket off a no ball. DHS could have had College 20 for 4. Both these batters capitalized on their fortune with a 100 run partnership for the 3rd wicket. This set the platform for the rest of the College batters and, combined with some ill-disciplined bowling from DHS, College eventually reached 273 for 8 in their allotted 50 overs.
DHS got off to a solid start and were looking well set, but in the over just before tea, they unfortunately lost opener Jared Manicum who had set a great start. Unfortunately, after tea, DHS batters could not construct a solid partnership and lost wickets at regular intervals. DHS were eventually bowled out for a disappointing 143.
College:        273 for 7
J Bryan – 4 for 71
DHS:              143 all out
T Owen – 36
J Manicum – 33
DHS vs Reservoir Hills Hub
DHS won the toss and decided to bat. We lost an early wicket in the 1st over but S Mackerduhj and Y Ramamand steadied the innings with a 50 run partnership. This laid the foundation for the back end of the innings and H van der Merwe batted superbly, making 64 off just 28 balls. DHS reached a competitive 157 for 3 off their 20 overs.
Reservoir Hub got off to a flying start reaching 31 for no loss after 3 overs. This was also compounded by a dropped catch in the 1st over, a no ball that went for a boundary and 5 over throws. Reservoir Hills batters continued to apply the pressure on the DHS bowlers and reached 80 for no loss after the 10th overs. The introduction of J Stride immediately made an impact as he removed the dangerous opening batter and DHS were able to close of the innings by restricting RHH to 128 for 5 after their 20 overs.
Kearsney:      269 for 6
R Shedlock – 3 for 50(10)
DHS:              179 all out
B Sambhu – 46
H van der Merwe – 38
DHS lost by 90 runs

A Shedlock
Head of Cricket