The guest speaker for the event was DHS Old Boy, Dr Menelisi Luthuli (Class of 2006).

The audience was welcomed to the ceremony by HOD, Mr Sunil Bodasing, and then addressed by the Head Master, Mr A D Pinheiro. Mr Pinheiro’s address was followed by a tribute to Mr Bodasing, paid by his colleague Mr R Smyth. Mr Bodasing has been promoted to Principal of Queensburgh High School and has left DHS after 20 years of service.

After a musical interlude Mr Ian Lewis introduced guest speaker, Dr Luthuli, who has a PhD in Business Science and has recently been promoted to Marketing Executive of The Spar Group. Dr Luthuli, a typical DHS Boy, played 1st Team Basketball, 2nd Team Rugby and got into his fair share of mischief which he always tempered with his winning smile.

Dr Luthuli talked to the Boys about growing up in Umlazi and his journey through DPHS, DHS and obtaining his doctorate. He had a number of messages for the boys – life is difficult, the sooner you accept that the sooner you can move on; learn to understand people and interact with them, form relationships that are important; adapt, create ideas, make sure you recreate yourself, things change; find your passion and follow it; invest in yourself; persevere through failure and disappointment; better yourself and believe in yourself; chip away at your goals; challenge yourself every day; when you get there don’t forget the people behind you; always do the right thing, integrity is key; and lastly, embrace our country, you are the future.

Dr Luthuli was then invited to hand over the awards to the prize winners. 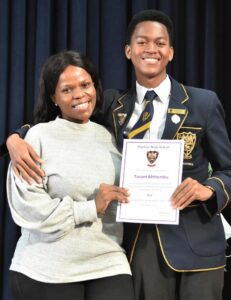 The major award for the day, the CG Hands Memorial Prize for Dux was awarded to Tusani Mthembu. In addition to being first in Grade 12, Tusani also achieved the W I Knight Prize for Mathematics, the Eddie Corlett Prize for Accounting, the subject prize for Life Orientation, the DHS Association Prize for Engineering Graphics and Design and a Merit Certificate for achieving an “A” aggregate in 2021.

Another major award winner on the day was Head Prefect for 2021 Samuel Spooner, who received the George Armstrong Award for Head Prefect of the School, the Stephen Mulholland Prize for All Round Involvement and Commitment and the Sportsman of the Year Award.

The GB Lapinsky Prize for Dux Proxime Accessit (Dux runner up) was awarded to Mikail Kreuzer. Mikail also received the Bill Payn Prize for English Home Language, the Chris Seabrooke Prize for Music, a Merit Certificate, shared the ‘SAS’ Nourse Prize for Geography and was awarded the John Adam Tollman Memorial Trophy for Outstanding Achievement in the Art of Music.

The Kessel Feinstein prize for third in Grade 12 was awarded to Jadin Dayanund, who also received the G J Armstrong Prize for Physical Sciences and a merit certificate. 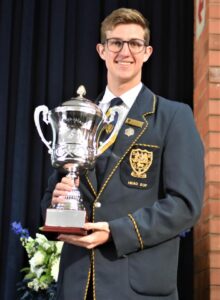 Samuel Spooner, Head Prefect and Sportsman of the Year for 2021

Once the prizes had all been awarded, Head Prefect, Samuel Spooner, took to the podium. He thanked Dr Luthuli and presented him with a gift from the school. He then addressed the audience, congratulating the Class of 2021 on their achievements and thanking them for their support and strength of character shown, particularly during these difficult times. He also thanked the Staff of DHS for the role they had played, saying “The values that DHS instilled in us since Grade 8 has been at the root of all the success that we as Grade 12 learners have achieved”.

Sam then assisted the Head Prefect for 2022, Owen Morgenrood, into his new Head Prefect blazer to signify the changing of the guard as he handed the reins over to the new watch.

The National Anthem was sung by all to end off the ceremony. Tea was served in the Seabrooke Theatre Foyer and this was followed by the Matric Bell Ringing Ceremony which was held on Van Heerden Field. 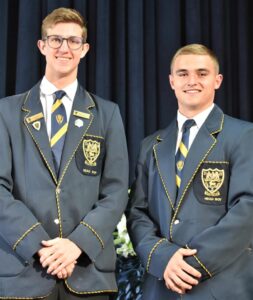 Sam Spooner read out the significance of the 8 Bells and then once again assisted new Head Prefect Owen Morgenrood into his new blazer to signify the handing over of seniority to the incoming leaders of the school for 2022.

The Matric boys then all filed past the Head Master, Mr Pinheiro, and Mr Shedlock, shook their hands and rang the Rhineland Bell overlooking the pool in farewell to their years at Durban High School. Each boy received a gift bag before going through to the Memorial Courtyard to sing the School Song and perform the war cries.

The list of other learners who received awards, subject prizes and merit certificates at Prize-Giving is as follows: 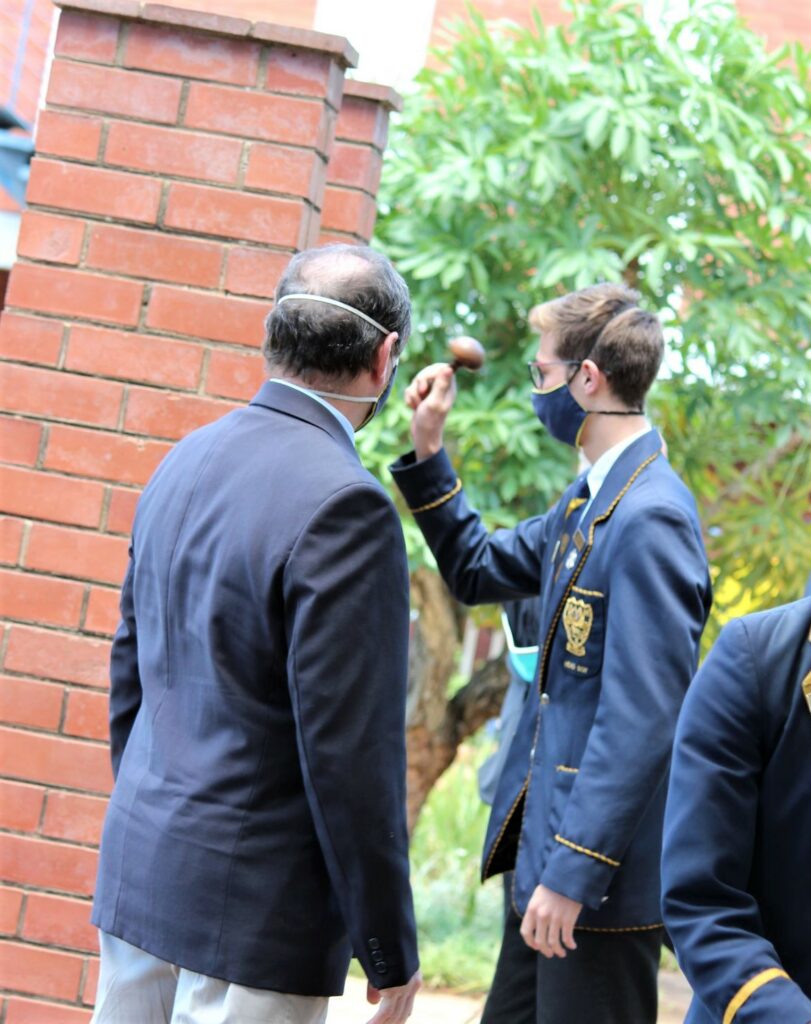 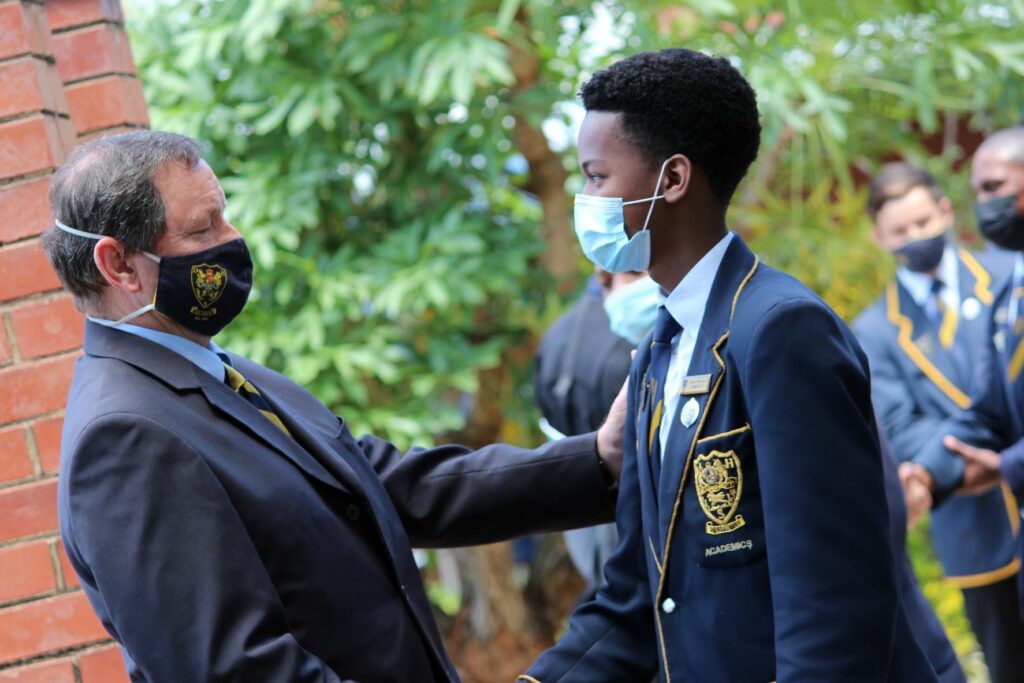 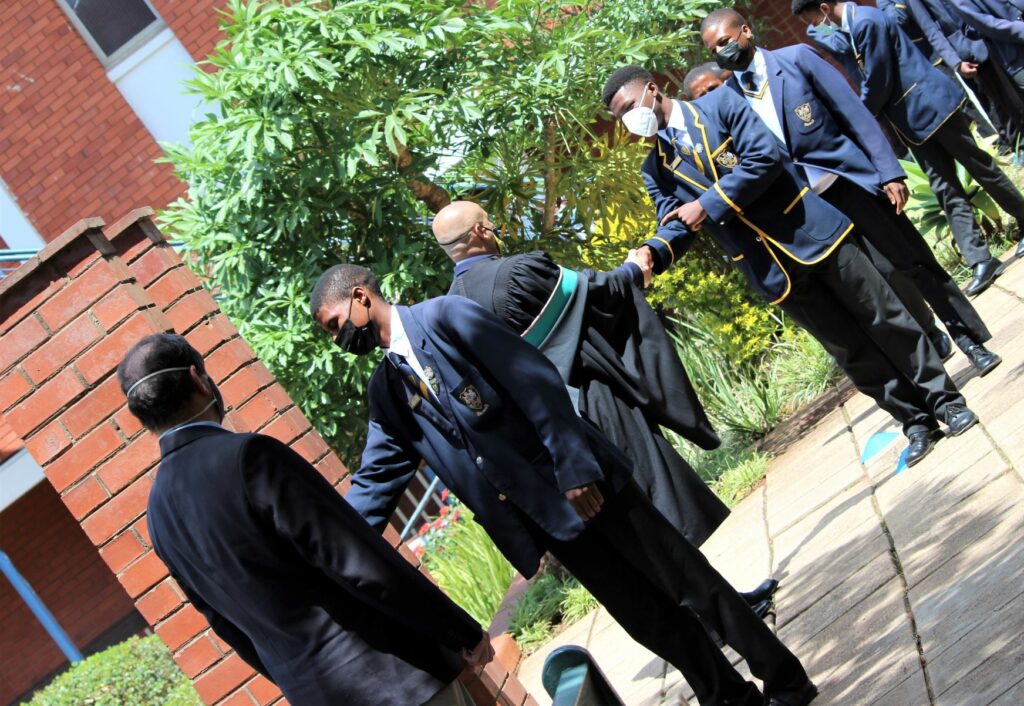